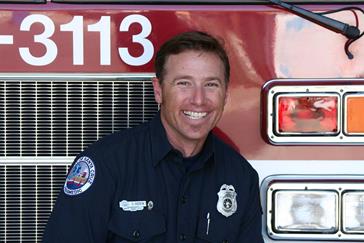 Fire brothers and sisters,
It is during a time of need that we reach out to you and each of your locals to request support for one of our own.
Firefighter Clayton Ogden was hired by Santa Cruz City Fire Department in 1999.  He is currently our most senior ranking firefighter.  Almost two months ago Clayton left work with a back injury that was thought to be the result of loading LDH after a wet drill.  At the time, he was in so much pain that his wife and teenage child had to drive from Merced (their home town), to Santa Cruz to pick up Clayton and retrieve his vehicle.  Since then, Clayton has battled with workers comp in an effort to secure an effective treatment for his back.  All the while, his pain level increased and spread throughout his body.  His wife, Becky, also noticed that he had been losing an excessive amount of weight.
Clayton returned to the hospital last week to get a second opinion.  It was at that time that doctors tested Clayton for, and eventually diagnosed him with, stage four cancer.  Unfortunately, his cancer has metastasized from his GI tract, to his bone marrow, and eventually into his brain.  He was informed of his ill fate on July 11.  Clayton is currently in a hospital in Modesto, but the plan is to return him home to spend time with his family in palliative care.
On behalf of Firefighter Ogden and his family, Santa Cruz Fire L1716 is reaching out to all CPF locals and associated fire personnel to solicit financial donations to assist with Clayton’s rapidly increasing medical bills, and to establish a trust for his three children.
Thank you in advance for your consideration and generosity.  Donations can be made out to Clayton Ogden and sent to:
Firefighters First CU                                                                       Ogden Donation Letter
C/O Clayton Ogden
5700 Stoneridge Dr., Suite 250
Pleasanton, CA 94588
Cody Muhly
President L1716
Santa Cruz City Fire Department